No matter what life throws at them, Jerry and owner Ruth can always find strength in each other

We adopted Jerry, an emergency rescue dog who was a bad way after being cruelly treated. Since then, he has come on leaps and bounds.

He’s been a real lifeline to me

He’s very sociable and friendly with other dogs and people and has been a real lifeline to me, especially when my husband passed away from cancer. He gives me a reason to get up and brings me such joy. He is also a brilliant guard dog, as well as being so loving and caring. He loves backs rubs – and running 40 laps around the garden!

When Mel was at her lowest, her dogs Brutus and Monty helped her to find the strength she needed to keep going

Not long ago, I was going through a very tough time both physically and emotionally, and had to take some time off work. My husband and I had recently bought a French Bulldog pup called Brutus for my daughter as a 21st birthday present. She works full time, which meant that during the week I had to get up each morning to look after him. Spending time caring for Brutus helped to give me some structure in my day, and soon I started to find a new sense of purpose and happiness in my life.

Brutus helped enormously to give me some structure

He is so full of character, and has brought nothing but love and joy into our lives. Of course, I had to remind myself that he wasn’t actually my dog, but my daughter’s. I think my family realised what a huge impact he was having on my life though, because a few weeks ago, they gave me my very own little French Bulldog, Monty, as an early birthday present!

Monty has fast become a member of our family. He’s full of energy and a very different dog to Brutus, but just as loving and affectionate as his older brother. He gets me up and moving every day and gives me the motivation I need to keep going. I owe so much to my two furry friends.

It took our dog, Meg, about nine years to be able to play with a toy without totally destroying it. She adopted her first cushion football after rooting through a charity bag of toys and claiming it. We’ve since bought her plenty more because she becomes so attached to them. She plays with them, takes them out into the garden and even falls asleep next to them!

She becomes so attached to them

Meg is not amused when we put her toys in the wash. We’re only forgiven when she can get them back out quickly, sometimes before they’re fully dried. The funniest thing about her obsession is that if you say football, she goes and finds one! She’s a great dog who’s always filling our days with laughter.

When Julie brought Nikka home, she gave fellow lab Bentley a new lease of life, and now the shoe’s on the other paw.

Nikka is a smooth coat Labrador, cream-coloured. We have had her for 18 months, and she is a fantastic friend to Bentley who’s also 7. We got Nikka under sad circumstances as her previous owner sadly died, and to keep her in the family so the person's daughter could visit, we agreed to take her on.

Bentley our other Labrador has arthritis and has been struggling with it for some time. He was depressed and sad, no matter what we tried to cheer him up, including all sorts of medication both herbal and vet prescription.

The day Nikka arrived she was a massive impact on us all. Bentley immediately wagged his tail and started to show off his toys snorting with delight. Like a missing glove, they fitted perfectly. They shared everything, slept together and played madly on pulley toys. Bentley was a new boy and Nikka settled so well.

Only unfortunately in the last six months she has developed cataracts and is now virtually blind. Bentley now guides her, takes her toys, gives her lots of loving licks and will wait for her in the garden to see her back indoors as she slips on the decking.

So Nikka helped Bentley but it turned and now Bentley helps Nikka – a perfect pair of loving Labradors. We are so lucky to have them and love them so much.

Introducing Great British Dogs’ brand-new ambassador: Paralympic silver medal-winning triathlete and star of Strictly Come Dancing and SAS: Who Dares Wins, Lauren Steadman. Read on as Lauren tells us about her adorable German Shepherd Meric Belle (and Meric’s equally cute brother Robin), lifts the lid on a whirlwind couple of years and looks ahead to what could be a golden future…

I decided to get Meric Belle when we lost a previous German Shepherd and it left a massive hole in the family. My dad wanted to call her Belle, but then my grandad Michael Eric passed away. We shortened his name to ‘Meric’ and she became Meric Belle.

Meric was my first puppy and she was forever biting everyone’s ankles. Then my sister Ellie moved out and she was a bit sad not have Meric there all the time, so she went back to the kennels where we got Meric. They had a couple of dogs that they had planned to show at Crufts, but apparently Robin was too big! It turned out Meric Belle and Robin had the same dad and different mums, so they’re half brother and sister. Ellie saw Robin and he melted her heart – she didn’t even ask her boyfriend before taking Robin home!

Since then they’ve grown up together, had Christmas together, gone camping and got up to all sorts of mischief. It’s a beautiful thing that has brought us closer as a family. We’re quite an active bunch anyway, so I’ll just say to Ellie, “Shall we go and walk the dogs?” These dogs can walk up to eight miles so it’s great to go and find a woodland walk. Our dogs just make everything special. Whenever it's my birthday, she always wants to open my presents!

Meric Belle has been my shadow during lockdown, and really helped reset me whenever it all got too much 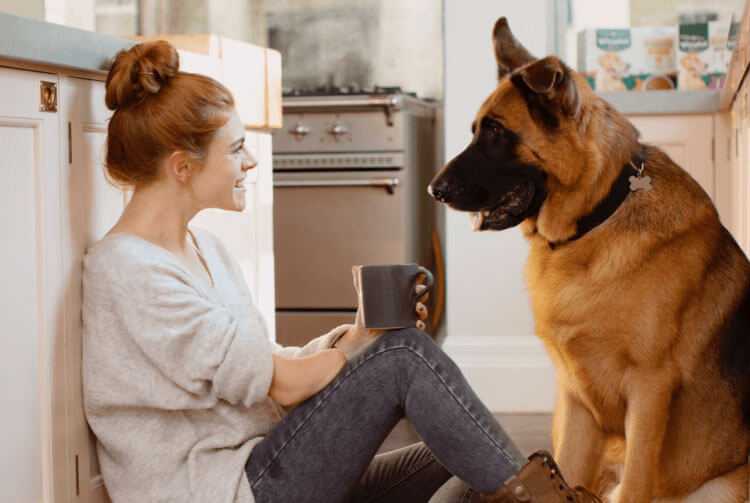 I was obviously pretty upset when the Paralympics got postponed due to Covid-19, because I was where I wanted to be, training-wise; I was getting really strong, in a really good rhythm. But in general I’m in a group of athletes who embraced lockdown and turned it into a positive. I left home and went to boarding school at 14 and haven’t had more than two weeks at home since then, so I took the opportunity to move in with my parents. It’s been so nice to spend six months of quality family time with them. Plus, I was able to keep training in my dad’s gym.

Meric Belle has been my shadow during lockdown, and really helped reset me whenever it all got too much. I’ll be working on something at the computer and she’ll just look up at me and we’ll go for a walk. She just wants to be near me – she’s always there for a cuddle with totally unconditional love. And if she really wants to get your attention, she’ll find something of yours, parade it in front of you and then run off!

When they set the Alsatians on us on SAS: Who Dares Wins, I thought 'well I’ve got two bigger German Shepherds at home!'

These past two years have been a whirlwind of amazing opportunities. Strictly was life-changing in many ways. It was great going from being really athletic to being a girly girl with lots of fake eye lashes and glitz and glamour and did great things for my body confidence.

And then with SAS: Who Dares Wins it was back to full-on athlete mode. The one thing an athlete is taught from a young age is: whatever’s going on at home, it cannot be there on the start line. So I found it quite easy on SAS to say: “Suck it up, Buttercup, and get on with it!”

When they set the Alsatians on us on SAS: Who Dares Wins, I thought, “Well, I’ve got two bigger German Shepherds at home!” I had so much to draw on and it gave me a bit of confidence to do something outside of my sport. I was running down cliff faces and had Ant Middleton pushing me out of helicopters into the sea; it challenged me more than ever before.

I can’t wait to get back to a really solid schedule of training with my coach. Hopefully the race schedule will start up next year, and I would love to bring home the gold next year in Tokyo. After five years of hard work, that would be amazing. Beyond that, I’d like to do a PhD in Psychology and Behaviour Change, and this year would love to buy my first house. I like having these things outside of training to keep me happy and motivated.

Whether I'm training or doing a TV show, I love thinking, “Oh, I can’t wait to get home and see Meric Belle for a big hairy cuddle!” Nobody loves me more than Meric Belle. I’ve never seen a human react to anyone the way she reacts when she sees me, whether I’ve been away for a couple of days or a number of weeks.

We got Keeva in November after a very tough few months in lockdown. Both my son and I suffer from heart problems, and Keeva really helped us to stay positive during the uncertainty of last year.

Keeva has really helped us to stay positive

Dogs were already a part of our family, as we have two Chihuahuas as well as Keeva. We adore them but they’re getting old and can’t walk far anymore. That just makes training Keeva the puppy all the more exciting. Taking her out for fresh air has kept us going and brought us closer together, and we have so many funny stories we can’t wait to share with our wider family when we can see them again.

Keeva is an Irish name which means bold and beautiful. It reminds me of my other son and his young family. They live in Ireland, so I haven’t seen them in a while, but they’re always in my thoughts.