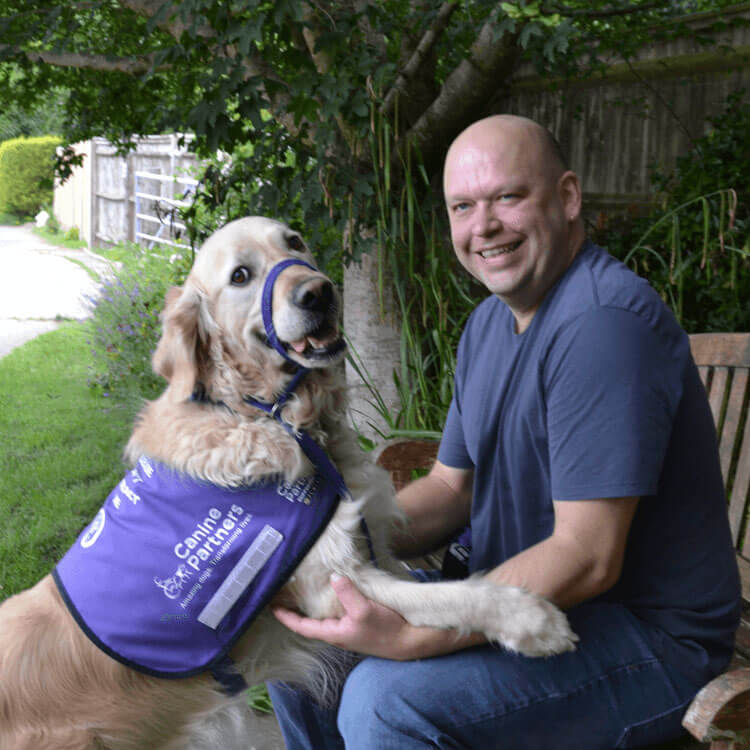 Alan’s Canine Partner dog Hamlin offers him as much assistance as he does affection.

Me and my assistance dog Hamlin have been partnered about four years now, which has gone far too quickly! I’ve been living with Parkinson’s Disease since 2004, and a few years ago I’d just lost my German shepherd, and I came to a session at Canine Partners to play with some dogs. I jokingly asked if I could take one of them home so they said, why don’t you apply? I thought “really?”

That got the ball rolling, and before long I was walking into a room to find Ham sat there looking a bit suspicious, but within 10 minutes he was asleep on my feet! I just wanted to take him home there and then, but there was of course two months of training to come.

His calming influence makes us such a good match. I get panic attacks from the Parkinson’s, and he’s so good at spotting them. He’ll come and rest his chin on my leg, so I’ve forever got wet patches on my knees. Nowadays he even gives me a hug as well, which Canine Partners don’t even teach them to do. That’s purely down to the bond we have.

We're such a
great team

I constantly drop my keys and wallet and he picks them up. If I fall he can get me up, and he can get me off the sofa, too. He loves opening the washing machine so much that I always hear the door clunk open, whether there’s washing in there or not.

I live on my own, and people who know me now worry about me a lot less. My family have also all completely fallen in love with him. We’re such a great team, and one of the best things is he’s given me the independence and confidence to go outside again.